The Story of Nutcracker 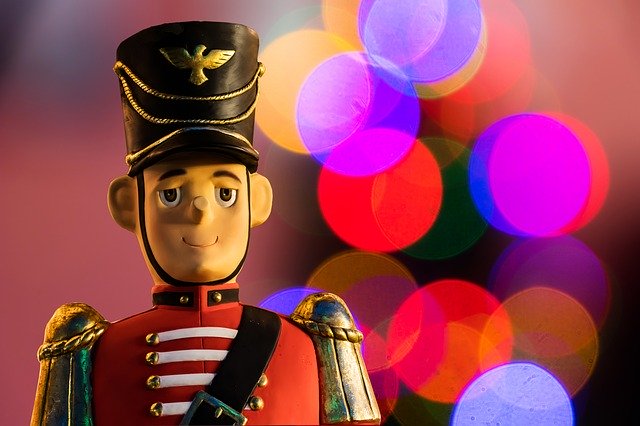 ACT I
It’s Christmas Eve, 1892 at the Stahlbaum family estate. The Stahlbaum mansion is an elegant and stately home befitting a successful merchant of the time. The main parlor is wrapped in fine oak paneling and a crackling fireplace sends forth an inviting warmth – a cozy refuge from the cold winter’s night. The Main Parlor is accessed from the grand hall which is dominated by a sweeping marble staircase that ascends to the mansion’s other many finely decorated chambers. The mansion is decorated for the holiday season. Wreaths and mistletoe adorn its thresholds and mantles. A freshly cut Christmas tree stands proudly in the corner of the Parlor and fine imported porcelain and glass ornaments gently hang from its branches .

The Stahlbaums prepare for their annual Christmas party, and their children, Fritz and Clara, await the arrival of their guests. The guests arrive and formal greetings are exchanged. The festivities begin with dancing and celebration. Suddenly, a mysterious guest appears in their midst dressed in dark clothing, frightening them. After a moment of trepidation, Clara realizes this mysterious visitor is her Godfather, Drosselmeyer the toymaker. Drosselmeyer with great fanfare unveils gifts for the children.

The girls receive dolls and the boys receive bugles and trumpets from him. Clara is given the best gift of all, a beautiful Nutcracker. As Clara dances and shows her magnificent gift to the guests, Fritz snatches the Nutcracker away from Clara in a fit of jealously. Playing keep away with the other boys, he taunts Clara. In a final show of disdain, he throws the Nutcracker to the ground and stomps on it, breaking it in two. Clara is shattered and begins crying. But quickly Drosselmeyer comes to her rescue and mends the Nutcracker with a handkerchief.

The evening grows late, the children grow sleepy and the festivities draw to a close. The guests thank the Stahlbaum’s for a joyous evening and bid them goodnight. The Stahlbaum family makes preparations to retire for the evening, and maids and servants quietly exchange gifts as the mansion grows still. Clara quietly creeps back to the now darkened Parlor to check on her Nutcracker one more time before bed. As she primps and plays with the Nutcracker, she drifts off into a sleep in a winged chair in the Parlor.

At the stroke of midnight Clara awakes. The house, the tree and the toys seem to be getting larger around her. Suddenly, an army of mice, lead by the ferocious Mouse King, begin to circle the room and taunt Clara. Clara uses the Nutcracker to ward off their attacks, but the attack becomes more frenzied. Drosselmeyer suddenly re-appears in black cape, and animates the Nutcracker. The Nutcracker leads his animated toy soldier army into battle formation against the mice army. The Mouse King traps the Nutcracker prince, but Clara comes to his rescue, throwing her slipper and striking the Mouse King. He is momentarily distracted, and the Nutcracker makes his move. They thrust their swords at each other. The Mouse King is slain and the mice army quickly carries away their defeated King. But, the Nutcracker is mortally wounded and slowly falls to the floor. As his animated life ebbs away, he is suddenly transformed into a real life young prince.

Clara is filled with wonder and joy at the site of her prince. Taking her by the hand, the Prince leads Clara onto a reindeer driven sleigh which guides her through a winter wonderland known as the Land of the Snow. Snow fairies and snowflake maidens dance in an enchanted snowscape. Act I closes with snow falling gently as fairies dance in delight and Clara heads onward to a land of fantasy. 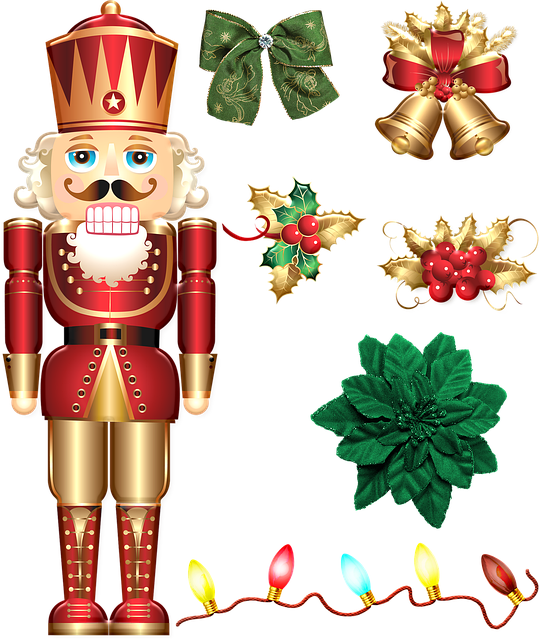 After their magical journey through the snow forest, they come to their destination in the Land of Sweets, and they are greeted by the Sugar Plum Fairy. The prince re-enacts the terrible battle and the night’s frightful events. The Sugar Plum Fairy is impressed with Clara’s bravery and the Prince’s heroism. She invites them to return to the castle. Clara is treated like royalty and a series of courtiers begin their festive dances in celebration of the Nutcracker prince’s heroic feat.

The Spanish Dance – Hot coco a Spanish dancer performs a fandango to the lively music of trumpets and castanets of the Spanish.

The Arabian Dance – The coffee dance is performed by a mysterious and exotic veiled dancer to an Arabian song.

The Mirliton Dance – Austrian shepardesses perform a folk dance and call to their flocks. After they finish, the sheep wander into the court to participate in the activities. Clara and the attendants gently lead the sheep in a playful dance.

The Chinese Dance – Chinese dancers perform to an uplifting Chinese inspired melody, evoking the mystery of the Far East

Next Mother Ginger, a towering woman dressed in festive baking clothes and large hoop dress enters the court along with her gingerbread dancers and spice drops. They perform a raucous dance celebrating the joys of gingerbread and spices.

After Mother Ginger exits, a heavenly harp calls in dancing flowers who perform an enchanting waltz.

The Flower Dance – The flowers dance in beautiful synchronization like flowers bending in unison to the wind.

This final dance signals the end of Clara’s fantasy evening. The Sugar Plum Fairy’s festival concludes when everyone joining on the court for a final dance. They bid Clara farewell as she is lifted back into the magical sleigh for return to home.

Clara wakes up the next morning under the Christmas tree with her Nutcracker still in her arms.

The Nutcracker is a two act fantasy tale made famous by the music of Peter Ilyich Tchaikovsky (1840-1893), who is universally recognized as one of the greatest classical composers of all time. He composed the musical work in 1891–92 under the commission of Marius Petipa, who himself was acclaimed as one of the most accomplished choreographers of his time. Pepita commissioned the work in connection with a new ballet production based on a story written 65 years earlier called “The Nutcracker and the Mouse King” by E. T. A. Hoffmann (1776-1822) in the year 1816, which was subsequently adapted by Alexandre Dumas père (1802-1870). Dumas transformed the story from a darker tale into a lighter, uplifting theme along the lines of the modern story version.

The Nutcracker ballet was first performed on December 5, 1892 at the Maryinsky Theatre, in St. Petersburg, Russia. By all accounts the original public performance was an utter failure, and was panned by critics and audiences alike. As one critic of the era reported “for dancers there is rather little in it, for art absolutely nothing, and for the artistic fate of our ballet, one more step downward.”

This resounding failure was due to misfortune. Tchaikovsky and Peptipa had previously collaborated in the celebrated and widely acclaimed “Sleeping Beauty” and it was anticipated among the performing arts community that their new collaboration was sure to be another master work. Unfortunately, Peptipa became very ill, which required his less talented assistant, Lev Ivanov, to assume the job of choreographing the production. As they say, “the rest is history.” The ballet disappeared from the public for over 50 years.

Despite its inauspicious beginnings, this ballet has become the most popular ballet performed in Western countries like the United States. It has become part of the fabric of the holiday tradition, being particularly popular around Christmas time due to its theme. Also, the ballet’s popularity can be attributed to it being particularly accessible and pleasing to young audiences because of its playful and fanciful nature, and well has having a fairly well delineated storyline that more casual observers of ballet can follow.

While the original ballet was unpopular, the music was an instant success, which may also have heavily contributed to the ultimate resurgence and popularity of the ballet. Prior to the ballet’s public debut, the suite was first performed under Tchaikovsky’s direction on March 19, 1892 in St. Petersburg, Russia before the local Musical Society, and received wide acclaim.

The modern popularity and association of the Nutcracker with the holiday season is most credited to the great ballet director and choreographer George Balanchine who reintroduced it New York City audiences in 1954. His inspiration probably came, in part, from the San Francisco Ballet, which performed the Nutcracker ballet for the first time in the United States in 1944. George Ballenge, an aging Ballet teacher at the San Francisco Ballet, is credited for its introduction to American audiences. He recalled performing dances to the Nutcracker as a child in Russia some 40 years earlier. Balanchine, who is readily recognized as one of the greatest ballet choreographers of the modern era, however is rightfully credited with revitalizing the production with the New York City Ballet and creating the Nutcracker tradition we enjoy today. It is also worth noting that he too had performed the Nutcracker as a child in Russia, and the San Francisco influence may be somewhat overstated. Thus, even though the Nutcracker Ballet appeared to ignominiously disappear into history’s bin of failed projects, the influence of a great master like Tchaikovsky would influence the dance and musical celebration of many Russian children of the day, and this gift would be passed down through time and re-emerge as a truly authentic and joyful Christmas Holiday tradition through a later genius in the person of Balanchine.